What should you expect when you go to Kathmandu ? It’s a city which fullfill your imagination, which you can heard of in many books. There is some kind of a myth surrounding it. In fact Kathmandu is dirty and noisy. Trying to get your way through the city by car, by the end of the afternoon need a lot of courage which even locals sometimes don’t have. In the center of it, you have Thamel with its narrow streets full of touristic shops, ready to disconsert you. But it is forgetting, spiritual way of living in Asia is pretty strong. You will notice this quite fast by strolling a bit everywhere, every few meters you will find, an icon into a hole in a wall, a enclave, a shrine. If you are a fine observer you remark the city abounds of this spirituality. Then roaming there is becoming a pleasure and that’s the defining moment when the fantasized Kathmandu join the real one. 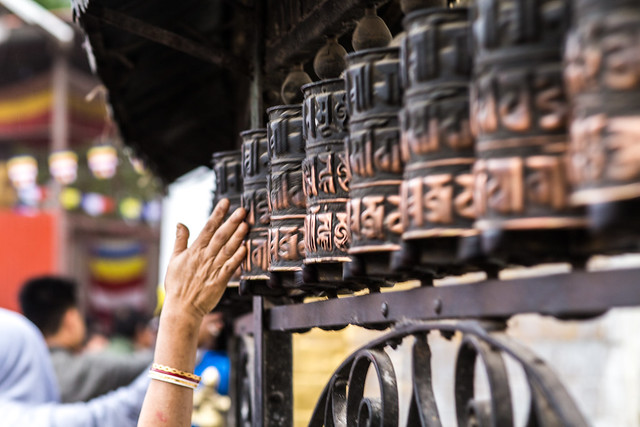 In the east of the city, a bit on the heighs there is Swayabunath or the monkey temple. A small wall with a lot of prayers mills is surrounding it. There are a lot of shrines, some water basins and if you are present for some religious festivities, I guaranty you the place will be really crowed. One of the main advantage, compare to some others temples is this one offer you a great view on the city. You will then realize the incredible anthill Kathmandu is. Just not to disapproved its name, you will of course cross some peaceful monkey hanging there or sometimes squabbling. The most impressive is till the stupa which set above the whole temple. Around it there is a multitude of shrines. Near this area you can find some monks or some nepalis summoning or burning encent. Others prayers mills surround the stupa. Make them turn while circuling closer to the structure is definitely quite an intern experience. 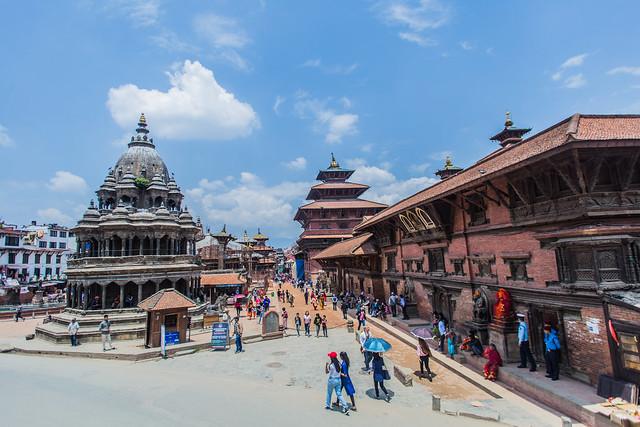 Patan is a small city in the south of Kathmandu. It’s the old capitale of Nepal, so it’s obvious this place have many shrines and very old temples. It is one of the great Newari city, you will quickly figure it out when you arrive to Dubar square as the architecture is so significant. This place is at the UNESCO patrinomy and you just have to agree when you will see the splendor of the temple, even after the 2015 earthquake which make a lot of them collapse. There are a lot to see like Vishwanath temple. Dedicated to Visha, and guarded by two elephants. The palace is now a museum. There you will learn a lot about the history of the city as well as Newari art. The highly decorated inner courtyards need to be seen. Before leaving the place, in front the main entry, there is a small building on which you can climb and have a great view a bit above the street level. 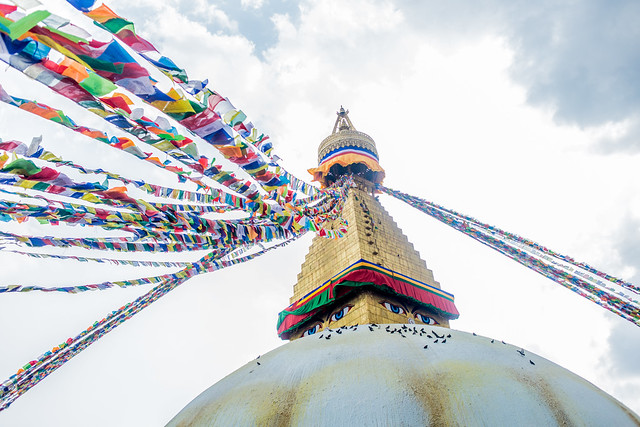 A stupa is a small piece of architecture which can take many shape, symbolizing Buddha. Bodnath (also called Big Buddha stupa) is one of the biggest in the world. It’s a bit oustide Kathmandu but it’s a must do. You are deeply impressed arriving in front of the structure with those divine eyes fixing you. With a little bit of wind, all the prayers flag are dancing together, giving to this place a power spiritual look. One bad point I have to mention here is the mercantile side of tourism which in my opinion is spoiling a bit the view. All around the stupa you will find restaurants, hotels or boring gift shops without any interest if you are looking for a bit of authenticity.